Who would have thought, in the midst of some of the most expensive real estate on the island of Oahu, there would be a cave that spits?  It sounds absolutely uncouth! Not to worry, though. The Spitting Cave is a Portlock destination that has all of its manners. The Spitting Cave of Portlock is near Koko Head, which is a piece of land that forms a side of Maunalua Bay. The shoreline around the Spitting Cave is composed of volcanic layers and has a small cave underneath, formed from the cliffs undercut by the water. Beyond the shore is some of the most spectacularly blue water you will ever see. When waves crash into the cave, water “spits” out in huge clouds of water and mist. When there are large waves, the action of the water hitting the cave walls actually makes the ground above shake.

The rest of the Portlock area is genuinely genteel. In fact, in Portlock, near Hawaii Kai, home prices range from $1.5 million up to over $20 million. Obviously, Portlock is a rather exclusive neighborhood. Most Portlock luxury homes are either on the water or else very near the beach. Portlock is located on the eastern or windward shore of Oahu. In addition to offering some of the best residential locations in the world, Portlock is also conveniently close to downtown Honolulu and Waikiki Beach. 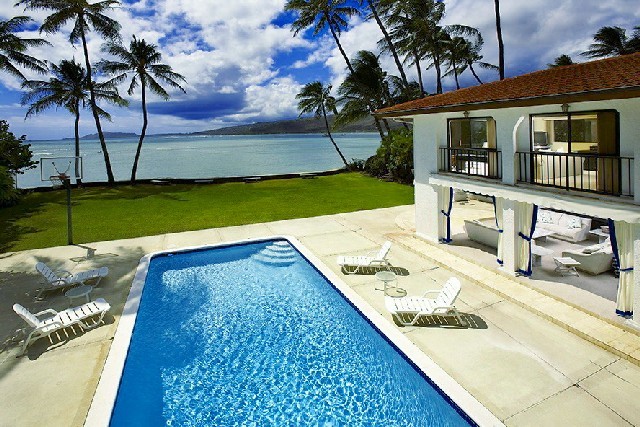 Henry J. Kaiser, who was an American industrialist and ship builder, originally developed the Hawaii Kai area.  Kaiser’s own home was actually located in the Portlock neighborhood. But, while “Hawaii Kai” echoes Kaiser’s name, Portlock was actually named after the British sea captain Nathaniel Portlock, who may have been one of the first to exchange Christmas gifts on the Hawaiian islands, all the way back in the eighteenth century.

One wonders what Captain Portlock would make of his namesake community. Portlock is full of luxury properties.  There are no “bad” views in Portlock.  Houses in Portlock may be old, or may be brand new, but all are beautiful.  Most of the homes are also quite large, especially by island standards. People who live in Portlock are treated to the very best of island living. The styles of houses in Portlock vary. There are a number of older but still beautiful classic kama’aina, or plantation-style, homes.Others are ultra-modern mansions with all the amenities imaginable. Contemporary upgrades are the norm, even in older homes. Everyone can enjoy wonderful sunsets and sparkling ocean waters in Portlock.

Beyond the houses and the Spitting Cave, Portlock has many other things to offer. Portlock Point is a great ocean beach destination. China Walls is located just past Portlock Point and is the site of some incredible ocean waves.   Despite some recent issues with accessibility to China Walls, many still go there to surf. People also enjoy snorkeling, scuba diving and even some (risky) swimming at China Walls. Hanauma Bay is only a five-minute drive from Portlock.

For those looking for some more sedate activities, there is plenty of shopping to be done in nearby areas. Portlock is close to many luxury-shopping venues, such as Koko Marina, in Hawaii Kai near Maunalua, and Hanauma Bay, which has waterfront shopping and dining. There is Kahala Mall, full of upscale stores, boutiques, and restaurants, which also has a movie theater. Those willing to go a bit further can hit the retail bonanza that is downtown Honolulu or even Pearlridge Shopping Center just a bit further down the road.