And, beaches, beaches, beaches, North Shore Oahu has so much to offer to both its residents and its visitors. Start in Haleiwa, just north of the Kamehameha Highway. Nearby there is Alii Beach Park, a smaller beach great for swimming in the summer months.  Not too far down the road is Haleiwa Beach Park, which has great scenery, and in the summer is the location of the Haleiwa Arts Festival (they actually set up tents on the beach). Haleiwa serves as the center of the North Shore’s social scene and arts community. Some may be able to find a condominium for $300,000 or so, but most properties are much more expensive. Haleiwa is unique, with a charming yet cool vibe in a town full of surf shops and relaxed dining. 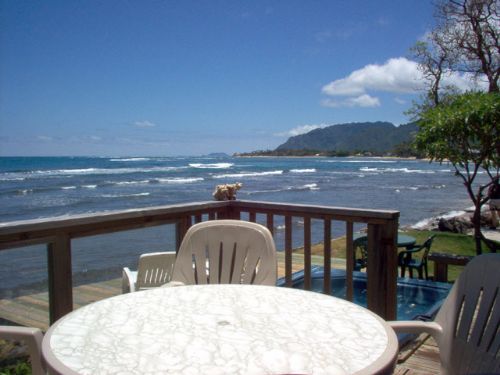 Moving on to Wailua, travelers will find an even quieter ambiance. Some single family homes can be found there for less than $500,000 and most are within walking distance of the beach. Before going on, a visit to Laniakea, a “Paradise for Turtle Watchers” that is also known as Turtle Beach is not to be missed. At the beach, Hawaiian green turtles come to shore just about every day. They seem quite content to catch some rays even with human nearby on the beach. While the turtles are still in the surf, they seem to like to ride the waves, similar to the human surfers further out in the water.

Waimea Beach Park is another great summer swimming beach, but in the winter some of the most spectacular and dangerous surf can be found there. Further inland there is the Waimea Valley Audubon Center and Waimea Falls, where there are regular rock diving displays and forest trails for hiking.  Moving to the east, there is Pu'u o Mahuka Heiau, which is a religious site or temple. It was built in the 1600’s, and the name means "hill of escape". Pu'u o Mahuka Heiau was an important place in the Waimea Valley, which was at one time a center of the population of Oahu. Pupukea Beach Park is separated from Waimea Bay Beach Park by a small residential section of Waimea town; there is a Marine Life Conservation District located off both beaches. Pupukea is close to some very well known surfing beaches and diving areas. Many people make Pupukea home, both in beachfront houses and in the uplands of Pupukea.

Kawela Bay is a gorgeous, lesser-known bay protected by a reef. Some are even able to swim and snorkel here in the winter. Kawela Bay is next to the location of the Turtle Bay Resort, and it is a bit of a challenge to get to it. There are not any houses along the beach any longer, although once there were. In 1986, the people who lived there were evicted so that a resort could be built…but it never was built. Thus, a fair amount of the land immediately surrounding Kawela Bay is undeveloped. Single homes in the Kawela tend to sell for between $700,000 and $800,000. On the other side of Turtle Bay Resort is Kahuku where there are single homes and condominiums also, and the prices are not cheap.

At the end of the North Shore Oahu real estate lineup (or the beginning of the Windward Coast) is Laie, which was once a “puuhonua” or sanctuary for fugitives. No one could pursue a fugitive while he or she was in the pu'uhonua. With million dollar single homes and some less expensive options available also, Laie is also the home of the Laie Hawaii Temple, which is one of the oldest Mormon temples in the world. Laie is also the site of Brigham Young University Hawaii and the Polynesian Cultural Center.