What’s in a Name?

Just off the Kamehameha Highway is the community of Aiea, a place of both beauty and charm.  Some say Aiea’s greatest claim to fame is that it is one of the few cities in the world whose name consists entirely of vowels.  However, there is much more to Aiea than just the letters of its name.  Aiea is located in central Oahu.  Once home to a sugarcane plantation, the development of Aiea began after the Second World War. Aiea is now a major Honolulu suburb that includes some affordable well-maintained housing options for many families. 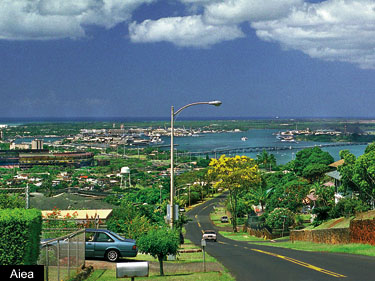 Aiea is close to Pearl Harbor. In fact, Aiea Bay is a part of Pearl Harbor.  Aiea is located between Pearl City and Halawa, and residents of Waimalu and Hlawa use Aiea for their mailing address.  One Aiea residential area, Aiea Heights, flows up into the hills above the town. The subdivisions of Newtown Estates and Royal Summit, at the western edge of Aiea near Pearl City, have some beautiful homes. Aiea real estate  has a number of housing options available, from one and two level townhouses to high-rise condominiums in addition to single-family homes.

Things to Do and See in Aiea

Aiea has plenty of shopping venues, including Pearlridge, which is the largest indoor shopping mall in Hawaii.  Pearlridge is separated into two sections, the Uptown and the Downtown.  Within Pearlridge is a monorail (the only one in Hawaii), and a hospital (Kapiolani Medical Center at Pali Momi).  Aloha Stadium is located in nearby Halawa.  Every Christmas Eve, the Hawai’i Bowl football game is played there.  Aloha Stadium also hosts the NFL Pro Bowl every February.  Aloha Stadium is also the home of the University of Hawai’i Warriors football team.

Pearl Country Club, located in Aiea, overlooks many landmarks of Pearl Harbor, including the USS Arizona Memorial and the USS Missouri.  To the west is a gorgeous vista of the Waianae Mountains. The golf course itself has a number of types of terrain, featuring downhill putting opportunities and hilly, tree lined par 4 hole.  The 18-hole "Pearl" course at the club has 6,787 yards of golf and a par of 72.

As with so many other areas of Oahu, Aiea has some notable hiking opportunities, including the Aiea Loop Trail, which begins at the top of Aiea Heights Drive.  There is parking available for hikers, along with bathrooms and picnic areas.  The trail is a loop around a graded ridge about 4.5 miles in length.   The Aiea Loop Trail takes about 2 to 2 ½ hours to complete.  During the trek, hikers can take in some terrific views of Halawa Valley and enjoy the lush foliage that envelopes the trail.  The trail is the site of the Kea'iwa Hei'au, a sacred Hawaiian healing ground. Its stone platforms sit near the gates to the park. Sometimes hikers encounter wild pigs on the trail, and there are guava trees growing on the side of the trail that might just provide hikers with a little snack along the way!