Lanikai - One of the best beaches in the world

Lanikai is a neighborhood within Kailua. It is located on the windward coast of Oahu, Hawaii.  Lanikai means “heavenly sea”. The name perfectly describes the gorgeous blue waters of Lanikai Beach and its soft sands.  Some say that the real name of the place is Kaohao, or “the tying”, a name derived from an old Hawaiian legend about a chief named Hauna who led two women to the beach and then tied them together with a loincloth. Whatever the name, Lanikai is beautiful. 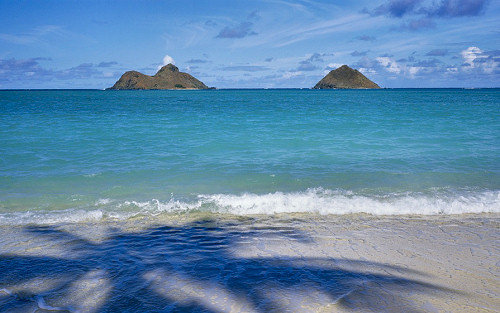 Lanikai Beach is a small half-mile beach repeatedly ranked as one of the best beaches in the world.  It has a protected lagoon that is sometimes described as being like a swimming pool. The waters of Lanikai Beach are very clear, but visitors should be wary of Portuguese Man-of-Wars (jellyfish) and the stinging limu seaweed.  Additionally, although the beach is nice and sandy, there are some large rocks. Nearby reefs make Lanikai Beach a great spot for snorkeling.  Common sea life that is spotted includes turtles and tropical fish. There is a pair of islands off the shore called the Mokuluas.  Both islands are bird sanctuaries, but many kayakers visit them.

A number of houses in Lanikai are rental properties, but all are in the best part of town because there is no ‘bad” part of Lanikai.  In fact, Lanikai is one of the most sought after, expensive areas on Oahu. Multimillion-dollar price tags, in Lanikai terms, mean houses in Lanikai sell for possibly over $8 or $9 million, and perhaps even more. Many multimillion dollar house are done up in the plantation style, although there are also a number of ultra contemporary styles. Beachfront homes command top prices, but what owners get out of them is unsurpassable.

One of the curious (but also very charming) things about Lanikai real estate is that amidst all of the huge estate like properties, little “shabby-chic” cottages and bungalows can also be found. There are a number of older homes here.  After all, this is one of the older communities on the island. However, high prices apply to even smaller properties, with most starting at around $1 million.

This area has its share of “brushes with fame”. Don Ho, the legendary Hawaiian musician and entertainer (who grew up in nearby Kaneohe) lived in Lanikai. The TV show “Lost” was filmed on Oahu, and its actors were often sited locally. Even Elvis Presley (anyone remember the “Aloha from Hawaii” music concert?)  owned property in Lanikai!