For those who can afford it, Hawaii Loa Ridge real estate offers some of the finest homes on Oahu.  The neighborhood began development in the 1980’s, and although most lots now have houses built on them, there are a few empty sites still available.  In total, there are over five hundred homes in Hawaii Loa Ridge.  There are reasons why properties in Hawaii Loa Ridge can command top dollar prices. Prospective homebuyers flock to this area because of its natural beauty and many added conveniences. 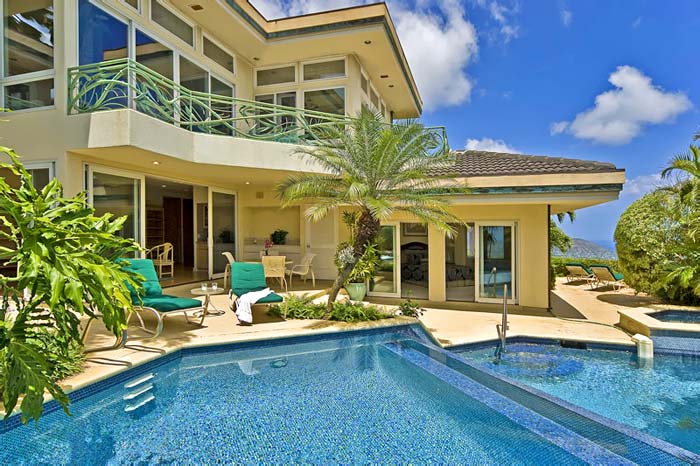 Once inside the community of Hawaii Loa Ridge, even more amenities become apparent, such as a pool and a clubhouse, and all of the areas are graced with gorgeous, lush tropical landscaping.  However, as would be expected with the graciousness of homes in Hawaii Loa Ridge, many families also have their own pools.

Within Hawaii Loa Ridge is The Pointe at Hawaii Loa Ridge.  This community has its own exclusive tennis courts, meetings areas, and a separate gate for its residents.  In an already higher priced area, homes in The Pointe at Hawaii Loa have expansive views across the island of Oahu and magnificent vistas of the ocean.  This is NOT the place to be for anyone who wants to avoid some of the best views on Oahu, but then again, who would want to avoid such beauty?

Oddly enough, within the gated community of Hawaii Loa Ridge is the trailhead for the Hawaii Loa Trail.  Cars are permitted to enter the community through the community’s gate, but only if there is a person who possesses a valid Hawaii Driver’s license or ID in the vehicle. Hikers are required to go through security and obtain a pass before entering the Hawaii Loa community. At the far reaches of the community, there is a small lot that provides some parking for hikers.

The Hawaii Loa Trail is generally considered to be an intermediate trail.  It is not a short hike; generally, three and a half to four hours are required to complete the hike.  The trail goes through dense forest areas and open ridges, and follows the contours of the ridge to end on a high point.  The last portion of the hike is probably the toughest, but the views make it worth it, with panoramic views of the eastern and southern coasts of Oahu.

For those who want truly gorgeous scenery surrounding a gracious home, Hawaii Loa Ridge is the perfect place to look for a residential property.