The silhouette of Diamond Head is one of Hawaii's iconic landmarks.  When viewed from Waikiki Beach, its resemblance to a “Leahi”, which means "brow of the tuna", emerges. It was not until nineteenth century British sailors saw glinting calcite crystals in the lava rock that the name “Diamond Head” came into use: the shimmering of calcite made them think that there were diamonds in the lava rock of the crater.

The saucer-shaped crater of Diamond Head, an “extinct” volcano, formed 300,000 years ago.  It has not erupted in over 150,000 years. The crater is 3,520 feet in diameter and its summit is 760 feet high. Fort Ruger once occupied the Diamond Head Crater. Designed for target sighting and constructed around 1910, the buildings at the summit are visited by tourists every day.  The crater itself concealed a number of canons for coastal defense.  The structures include an observation deck with four levels of beneath it that served as a command post. In the 1940’s, the construction of the 580-foot Kahala Tunnel through the eastern side of the crater made access to Fort Ruger easier. 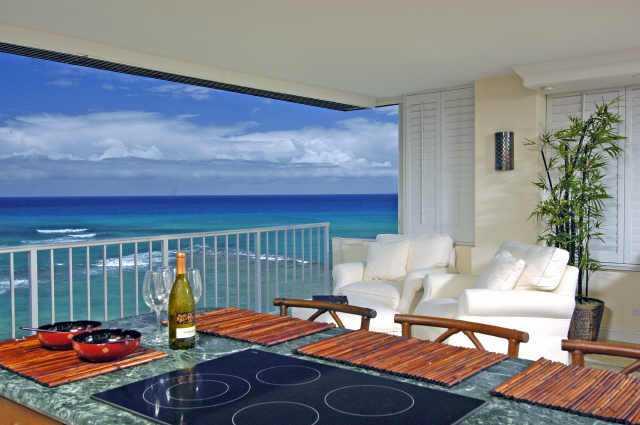 The development of radar led to the abandonment of Fort Ruger, and Diamond Head is now primarily a hiking destination.  There is a fee to hike the trail and to park within the crater. Access to the summit and the remaining structures is by way of a mostly paved trail. There are some tougher spots in the walk, such as two sets of stairs, one with 99 steps and the other with 76 steps, and there is a 225-foot tunnel may prove challenging to the claustrophobic. The hike is totally worth the time and effort, because the view is breathtaking.

There are a number of different neighborhoods surrounding Diamond Head.  Waialae Nui Ridge has stunning single-family homes.  Wailupe Beach is a small enclave where most homes are very close to the beach. Kahala is located on the eastern end of Diamond Head, and is home to some of the most expensive real estate in Hawaii. Aina Haina is a residential community located to the east of Diamond Head, off the Kalanianaole Highway.  It was named after a local dairy owner named Robert Hind.  Hawaii Loa Ridge is a private gated Neighborhood.  Kapahulu has a real local flavor, with great restaurants and boutique shopping where buyers can find single-family homes, duplexes and condominiums.   For those who want to live right on the water, there are many upscale condominiums in high-rises along the beach.

For those just visiting, there are plenty of accommodations in the Diamond Head area. There are vacation homes and condo rentals in addition to bed and breakfast establishments.  Area hotels include the Kahala Hotel & Resort and the more affordable EconoLodge.  Visitors should also check out other local attractions such as Kapiolani Beach Park, a quieter beach with shade and picnic areas, and The Honolulu Zoo.

No matter if you live near Diamond, or just stay at a nearby hotel, be sure to enjoy the views!